When we create any Asp.Net Core Projects, the Asp.net Core templates include Kestrel web server by default

Kestrel web server is included in the project as a Nuget package Microsoft.AspNetCore.Server.Kestrel

If you have been developing Asp.net application for some long time, then you may have a question what was the necessity of Kestrel when there was well established web server IIS!

Why Kestrel web server when there is IIS?

First reason is, IIS is limited to windows OS only, but now Asp.net core was designed to be hosted on other platform like LINUX, Mac, so there was a need for a web server that can run on different OS apart from windows.

We can use Kestrel Webserver just by calling the method UseKestrel() in host builder of Program file.

Notice .UseKestrel() method in above static BuildWebHost method, Specify Kestrel server to be used by web host. that's how kestrel server is configured in an Asp.Net Core application.

How to start Asp.Net Core app with Kestrel 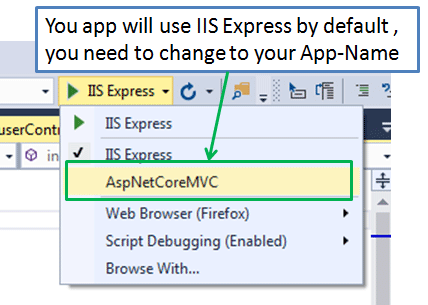 Now if you click on F5, your Kestrel web server will start, and your web page will open up in default browser.

You will see a black DOS window will open up, the window will display all hosting related information.

If you want to shut down the Kestrel web server, you can either close the window or press "control + C" to shut down.

You also can run the application from command prompt, just to open command window and then run the following command.

Before running the above command make you go to project folder location in your DOS window.